As a private pilot, the weather is often of particular interest to me. I like a good rainy day or thunderstorm as much as the next person, but when you're in a light aircraft, they're really not ideal - especially when flying in or around mountains, and I hear there's at least a few of those here in Colorado.

Of course, aviation has solved this with some of the most regularly-updated and precise weather reporting around, and as such, where there's even a small public airport, there's probably a weather station emitting METAR reports. Even better, there's four rough categories of weather for flying - VFR, MVFR, IFR, and LIFR. Sounds like a good subject for a map to me. 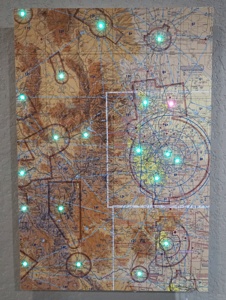 So, I've built an aviation weather map with lights at each airport showing the weather. Two maps, actually - I built one last year for the San Francisco Bay Area, but moving state meant redoing the map, so I've recorded the build in the video above, and I'm writing this down so you too can build one if you wish.

The actual physical map for the build is made of:

Then the electronics take a little bit extra: 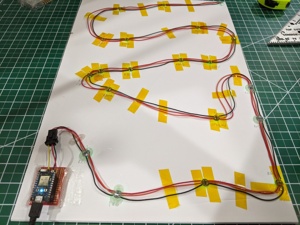 You can see the full build process in the video, but the basic steps are:

The software for this is relatively simple, and I've uploaded mine to GitHub so you can take a look over it.

I've used a Particle board, because I'm a fan of both their flash-over-the-air technology and the ability to handle API requests on the server side; on the device you just subscribe to and send simple text-based events, and then in the Particle console you can tie those into API calls that handle the SSL and JSON decoding for you. It's rather nice, and Particle do charge a small monthly fee for the Device Cloud usage but I personally find it worth it (it's especially nice with their LTE boards that do all this, transparently, over mobile data - including the flashing part!)

If you want to use a more standard Arduino-like board, you'll have to replace the Particle eventing code with an SSL client and a JSON decoder, so expect to use a moderately powerful Arduino board for that. You could also put a Raspberry Pi as the driving board if you really want to go all-out; there's plenty of libraries for talking to addressable pixels from the Pi's GPIO pins, and you can use a nice language like Python!

Additionally, as I mention in the video, I used a piece of code to turn a set of image tiles from a tiled "slippy" map server into a single PNG; that's part of my landcarve suite of tools, and you can find it on GitHub. There's not a great user manual for it right now, but if you do landcarve tileimage --help you can hopefully figure it out. 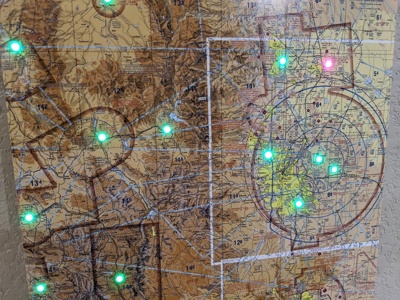 It's a nice moderate build - the LED soldering is the main annoying part of it - but I do enjoy having the map up in my study, and as a bonus, it's useful to glance at when I am about to go flying to see if it's even worth heading out, or cancelling due to weather.

I also found it fun on the San Francisco version to watch weather literally roll across the map from the coastal side as the marine layer drew in; the weather here in Colorado has been pretty nice since I built this version, so it's mostly shining green the whole time, but I'm curious to see if there's a similar effect as mountain/winter storms roll across the state.

I would love to build a bigger version of this that was all of Colorado - after all, it's a rectangular state, so it's easy to make a wall map of - but that needs a large-format printer, and I don't have easy access to one of those right now; I'd have to go to a printing shop to get it done and pay the requisite cost. I might still do that, but during these times of pandemic, I am trying to keep my projects as inside-the-house as possible for now.

I guess there's also room to build a several-hundred-LEDs version of this that's the whole country, but the map you see here was already about 4 hours of soldering wires onto tiny pads; I think at that scale, I'd just try and find a proper pre-made string of addressable LEDs and just deal with the extra wires and depth somehow!