Growing up, experiencing the US via only the films and TV that reached the fair shores of Britain, it was my belief that the road trip was the most fundamental of American traditions - a type of pilgrimage that everyone must do at least once.

I've lived in the US now for five years, and in that time the longest drive I've done was a return trip to Crater Lake from San Francisco and back again. You can do it in a day each way if you really must, but I took three just to make it a little more relaxed. It's definitely a road trip, but for some reason any drive that finishes where it started doesn't quite feel like a proper road trip.

This year, though, my and my boyfriend learnt with some surprise (and not quite enough notice) that his job was moving to Denver - as he'd requested, since it is his hometown, but a year or two earlier than we thought the transfer would come through. I'd been in San Francisco for five years (four more than I originally planned) and so I was more than happy to follow him here.

Many people's first reaction to learning that I was moving to Denver was knowing that it definitely existed, but being somewhat unsure of where it is. That's fair enough, because it's pretty much in the middle of nowhere - nestled alongside the Continental Divide and the Rocky Mountains, with nothing but plains and mountains surrounding it.

If California is the end of the American Wild West, then Colorado is arguably the start. Everything in between is a stunning collection of wild, harsh environments, and it would be doing a disservice to merely fly over them, as I have many times before.

Given this, it was almost a certainty that I would want to drive from my old home in San Francisco to the new one in Denver - and drive we did.

The portion of the drive through California is one I've done many times before - as it passes directly next to Lake Tahoe, the "local" ski basin for the Bay Area (even though it's almost four hours away on a good day).

While the Bay has some excellent geography and viewpoints - which I'd done a tour of on my motorbike the day before the move - most of this drive is a thoroughly boring drive across California's Central Valley. Two hours of flat nothing is finally interrupted by Sacramento, which then leads into the foothills of the Sierra Nevada.

The Sierras have been my closest "real" mountains for many years, and they're stunning in their own right. This is the range that contains at least four different National Parks, including Yosemite, and where even the more normal mountain passes offer stunning vistas.

We did this first part of the drive in the afternoon, after the movers had left, and so we only did the relatively short stint across to Reno, Nevada. I've been to Reno once before - for five minutes as I landed at the airport and then took off - and so this was maybe a chance to experience the Biggest Little City a bit closer.

That was a chance I decided to entirely ignore as we checked into a casino hotel, getting upgraded to a ludicrously sized room in the process, and turned in for the night. You have to save your energy, after all.

They call this stretch of US 50 the "loneliest highway in America", and it certainly deserves the name. Over three hundred and fifty miles of one lane highway stretch out over the high desert, with tiny rural Nevada towns every sixty or seventy miles. This was, of course, the route we chose.

It's impressive how little there is out here - every so often, you pass a road junction with a sign that tells you there's a minor attraction off the road a mere fifty miles away. For the most part, it's eight hours of driving through nothing.

We stopped in the small town of Austin, NV for lunch. I'm not sure I've ever seen a town that looks quite this much like it froze in time during the Wild West era, shopfronts, eerie lack of people, and all. The cafe we went to was nice, even if the interior decor was reminiscent of an over-enthusiastic grandparent trying to celebrate Halloween.

As you keep driving and approach the border with Utah, you pass Great Basin National Park, looming high over the landscape. The titular basin is easily visible from the road, but given it was both late in the day and the winter season, it wasn't the right time to visit. I'm quite sad about this - several people have recommended it to me - but I'll be out this way again to make sure I visit it.

We stayed overnight in Salina, UT, just over the border into Utah, too dark to see any of the landscape that awaited us the next morning, but safe in the knowledge we were now over halfway.

I'm not sure I was quite prepared for Utah's natural beauty - shortly after leaving Salina on I-70, the canyons and mountain ranges started to unwind before us. They may have a lot of national parks, but even the normal, regular landscapes next to the freeway are stunning in their own right.

It reminded me a lot of the stereotypical vision you see of the Wild West - not helped by Westworld being filmed in Utah, I'm sure - and in many ways, my trip to Arizona and the surprising beauty that can come from just geology.

This was also the day we had set aside to not simply drive as far as we could - eight hours would have got us to Denver. Instead, we took a diversion down to a famous pair of national parks - Arches and Canyonlands.

Arches is maybe one of the five most famous parks in the US, and you see imagery of it anywhere that talks about Utah. It's also traditionally one of the most crowded parks in the US, but thankfully coming at the start of winter meant it was merely a normal amount of tourists - easy enough to get in and drive around, and walk a few trails. 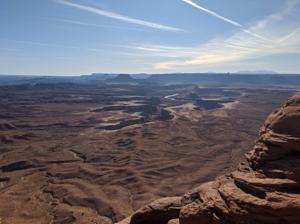 Arches requires a lot of trail walking if you want to get up close to some of the most spectacular arches, so our limited time meant we had to settle for a few shorter trails to see some lesser-known arches and only view the famous Delicate Arch from a distance. It was, however, still lovely.

I will reserve the word "spectacular", though, for Canyonlands. It's deceiving during the drive up to it - you wind up a rather normal-looking road through a series of plains. But, once you get to the park itself, you realise what you've been doing - driving up onto a huge plateau, surrounded by giant, 2000-foot canyons that plunge down to the Colorado River and Green River below.

Standing on the edge of the canyon wall is incredible - you can literally see over the entire landscape as it opens up below you. It's certainly not for those who hate heights (though there are sections with guardrails, which made even me happier to be near). The obvious comparison point is the Grand Canyon, but it's very different - the sheer horizontal scale of Canyonlands almost makes it more impressive, even if the canyons themselves aren't quite as big.

We only visited the Island in the Sky portion, as the other areas require a multi-day commitment, but I would love to come back with a 4x4 vehicle and explore them.

After overnighting in Grand Junction, CO - which is right on the Colorado/Utah border - we resumed our long drive along I-70, up through the Rocky Mountains and into Denver itself.

This section of I-70 is the highest interstate in the entire US - climbing to over 11,000 feet - and was one of the hardest to build. The last part to be finished, and arguably the most spectacular, is the section through Glenwood Canyon. This is where the canyons of Utah meet the Rockies, and the sharp turns and winding road only highlight the wonder of the mountains beyond. I was glued to the passenger window most of the way, marvelling at the landscape.

Eventually, you make it up into the main range of the Rockies, home to all the ski resorts, before starting the long downward drive to Denver. 44 miles of steep descent mean the journey is accompanied by the scent of the more unaware truck drivers burning their brakes, as you finally round a corner and see Denver spread out on the Great Plains ahead of you.

This was definitely the longest drive I've ever done - clocking in at just over 1,200 miles - and while I'm very glad I did it, and saw what was along the way, I don't think I would want to do it again on the same schedule.

One nice thing we did was make sure that each day had less driving than the last - that way, as you get further in and the fatigue sets in, you have less to deal with. Delivery and work schedules meant we couldn't stay around too long and do much shorter stints - say, 200 miles a day - but I'm OK with that. When I'm set on moving to a place, I want to get there. There's plenty of time for exploration once a move is done - but it's nice to see a few national parks along the way!

The other thing I was somewhat reticent about was travelling through the rural US as a gay couple. While these are not the worst states to travel through in that sense, they're certainly not the best, and we got a few odd looks along the way, and several restaurants were very offput when we wanted to pay for food together rather than splitting it.

Thankfully, nobody was outwardly hostile to us, and we picked big chain hotels that seemed to not have any complaints from others in a similar position, but I still felt a little on edge, especially in the modern US political climate.

Am I planning future road trips? Of course! Colorado has plenty to see, and there are some people in neighbouring states I'd love to go see, though at some point (like, say, Yellowstone) I draw the line and will just fly-and-drive instead.

We're now getting the house we're renting furnished a little, and waiting for the movers to turn up with a large amount of household items and furniture. I'm going to take a winter off from travelling too much (excluding, of course, many visits to the very conveniently located ski resorts). Next year, though, I want to cross the 25% threshold on national parks visited - and maybe go a lot further!